This is a complete control deck upgrade kit for the Final Fight Arcade1Up machine. The kit works with the installed game board and is 12v for simple installation. Here is whats included

Nice Button Kit, easy to follow videos for product installation and looks great. Have purchased 4 other kits for different machines and all work and look great. 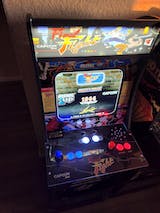 c
clint crites
my 1up collection has new life

easy to install. the buttons work great. my original buttons were squeaky and was causing me irritation while playing 1942. the crystal bats look great and even glow a bit from the led buttons soft light. fast processing and shipping. im glad i stumbled over this website and have been busy upgrading my 1up collection. 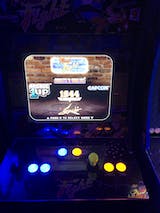 This was such a great and easy to install upgrade. So much so that I ordered more button kits for my other arcade 1up’s. Fast fulfillment and shipping. The buttons are responsive and the led colors are rich. There is no squeak or rubbing sounds when pushed repeatedly. Im back to being addicted to 1942. The original stock buttons squeaked so much while rapid firing that it drove me away. I may end up changing my 2 white buttons later, but only because the white is very bright. Also, the way the light from the led buttons make the crystal bats shine, is nice.

Brand new to trying to wire something like LED buttons to an arcade machine but thanks to everything that you guys supplied with videos on YouTube, you've made it ridiculously easy! one of the best , easy, and also very prompt services I ever dealt with. Would definitely recommend and will gladly come back for any future projects

I have installed several of these now and they always work great. I was a little hesitant at first, but with the instructional YouTube video, installation on your Arcade1Up is a snap!

Added to your cart: