Pandora's Box 9D Console kit. This is a 100% plug and play wireless setup for your TV!

Superfast shipping , great communication with answering all my questions and product exactly how it was described !! I will definitely purchase here again and am already putting another order together. Thanks for the great service !!

I bought this unit because I was unhappy with a big arcade control type Pandora’s box I got from amazon. This one with the remote controllers is by far much better and compact than my other. The games play better and the PlayStation controller feels More comfortable than I expected. Also I had a issue when I received my order and contacted back to let them know the situation. The support was awesome and fast without any extra time wasted going back n forth on getting it resolved. I would not hesitate to buy from them again and I’m looking forward to what new products are sold in the future. Don’t waste time shopping around buy here now! 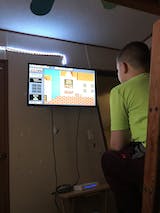 From the best I can tell from reading and YouTube, this is an upgraded clone Pandora’s Box 5 in a neat console package.
It plays Capcom fighters and Metal Slugs awesome, I’m sure someone with a perfectionist mentality would find that frame 17 during a fireball might be off by .1765 seconds, but I’m not looking for competition quality.

Hook it up to a TV, or as we did a projector outdoors and have some fun!

The controllers are just ok, but my Madcatz arcade stick for the 360 works great as well as a PS3 controller. There may be others but that’s what I’ve tried.

There are 3 USB ports. 2 are for controllers, one I’m not sure honestly, I’m thinking if it were in an arcade stick you could use it to connect to a PC or PS3 to use as a controller.? It’s not dead as I thought initially, so hope that helps someone.

There are a ton of games and a ton of jacked versions, if you like KoF, you will love this. There are a lot of KoF versions.....did I mention KoF?

Not sure what else to say, the only reason I didn’t give it 4 stars would actually be the included controllers. I felt they are even marked for the button layout confusingly. That said, just use an old arcade stick and it’s mapped perfectly.

I do not believe adding games is possible, I could be wrong but most of anything you could want is here.

It does not seem to work with USB encoders unfortunately. I thought maybe putting it in an arcade machine already wired with o e and just using the existing USB setup I had would work. Unfortunately only the joystick did for me, maybe I’m missing something.

Thanks for carrying these Shane, love it!